After an apprenticeship in his father's Fasson business, Eugen Batz learned free drawing at the advanced vocational school. He traveled to places rich in art, attended the School of Arts and Crafts in Elberfeld and consolidated his artistic career. In 1929 he joined the Bauhaus in Dessau and in 1931 followed Paul Klee to the Düsseldorf Art Academy. From 1933 he worked mainly in his father's company, leaving little time for his art until the end of the war. In 1946 Batz returned to the art world with exhibitions and the publication of a portfolio of graphic works. In 1949 he was a co-founder of the "New Rhenish Secession" and continued his travel cycle through Italy, Spain, later to Turkey and in the 70s through Tunisia. Due to a heart disease in 1959 he withdrew from the family business and thus had more time for painting. (E.W., J.D.) 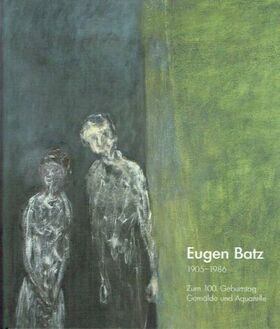 1905
born in Velbert
1918
Apprenticeship in the barrel turning shop, his father becomes co-owner, 1927 re-establishment of the company under Eugen Batz' name
1919
Attendance at the Gewerbliche Fortbildungsschule, Velbert, drawing course
1923
Member of the so called Wandervogel group "Sonnenwinkel"
1924
Trips to Bremen, Hamburg, Lübeck, Travemünde and Worpswede
1925 - 1927
Studies at the School of Arts and Crafts, Elberfeld
1929
Studies at the Bauhaus, Dessau, financed by selling pictures. Preliminary course with Josef Albers, photographic training with Walter Peterhans, free painting class with Wassily Kandinsky and Paul Klee.
1930
first abstract works are created
1931
Moves to the Düsseldorf Art Academy with Paul Klee, becomes his master student
1933
Travels to France, works for half a year at the foot of the Pyrenees, after returning he works again in his father's business, paints and draws only in his spare time
1934
Visits Paul Klee in exile in Bern, one year later he stays there for three months
1935
Marriage to Hildegard Frenking, four children
1939
No military service, as his father's company manufactures products needed for the war, hardly any time for artistic activities.
1946
finishes paintings that he had started in 1936
1947
Visitor at the "Donnerstagsgesellschaft" in Alfter
1949
Publication of the portfolio of 9 etchings with the support of Werner Haftmann
Co-founder of the "Neue Rheinische Sezession", regular participation in its exhibitions until 1955
1953
first big trip after the end of the war through France, further trips to Italy, Spain, Turkey, from the mid-1970s annually to Tunisia
1954
Image structure is solved in favor of free color development
1959
Retires from business due to heart disease, has more time for his art
represented at documenta II in Kassel with three works
1962
first figurative works with mythical themes
1978
Retrospective in the Modern Gallery in Hardenberg Castle, Velbert-Neviges
1986
dies in Wuppertal